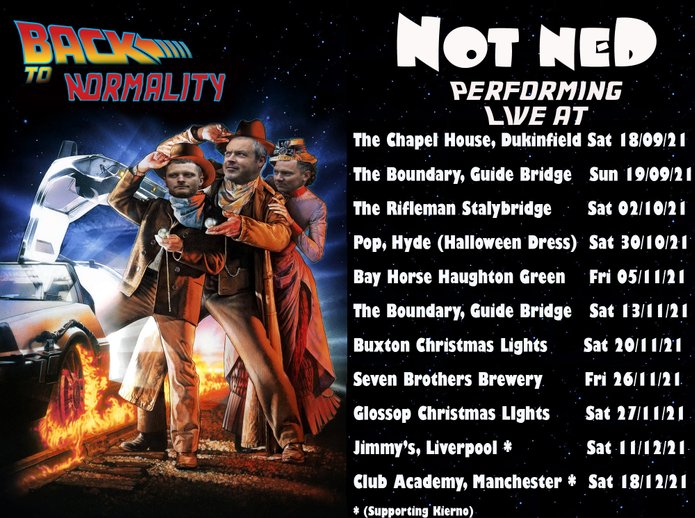 Not Ned are a 3-piece band from Denton, Manchester.

After meeting in their local pub where they discovered their sound and wrote their first material Chris Tollett (Bass) Steven Lee (Guitar & Lead Vocals) and Paul Taff Macey (Drums) eventually moved into Silver Lining Studios and started work on their live set.

After returning to the pub once a month to test their new sound out on a local audience they signed with promoters MCR Music at The Studio Peter Street Manchester.

This deal afforded them the opportunity to play to a wider audience in Manchester Bars and Clubs, the most notable of which came in March 2008 at The Manchester ‘Academy 3’ attracting a following over 120 people, the success of this gig resulted in numerous other appearances in Manchester including a return to ‘Headline’ the ‘Academy 3’ in June 2008.

The June date at the ‘Academy 3’ gave the band the opportunity to showcase their first EP ‘Nothing comes for free / Mother Junkie’ which had been recorded at Suspect Studios in Hyde.

They’re Pop/Punk sound and high energy live performance proved so popular that almost every copy of the EP was snapped up on the night.

In 2009 They got through to the final of Whatfest Battle of The Bands and then went on to win the Online poll to get the opening slot to play at Whatfest Music Festival with crowds of 15,000 over the 3 days it’s on.

Now in 2019 after a break with side projects and the entire band becoming Lazy Charlotte for a brief period the band have gone back to being Not Ned and instantly set to recording their Debut album ‘Every Cloud’ at Silver Lining Studios with producer Owen Alec Ashworth for release in December 2019. The Video release of their Single ‘Pick up the phone’ hit over 300 YouTube views within 3 days.

2019 was a good year for Not Ned headlining New Mills One World Festival in July, playing Salford Winter Festival and playing the Glossop Christmas lights switch on in November and some local performances at village fetes, and local venues.

The bands influences include Oasis, The Killers, The Klaxons, The Rolling Stones, Stereophonics, Damien Rice, and Foo Fighters, this makes for a unique sound that combined with gritty vocals and honest lyrics will never be forgotten.

Learn how to put a song on itunes at ReverbNation.com